Where to Find Us
Home  ›  Blog  ›  Hardwood Decking: Dispelling the myths of deforestation in Tropical Rainforests

Hardwood Decking: Dispelling the myths of deforestation in Tropical Rainforests

DON’T LET US BE MISUNDERSTOOD

Timber harvesting practices in the tropical rainforest are generally misunderstood. Many people think that exotic hardwood decking or flooring is sourced illegally or unethically and destroys the Amazon or Asian rainforests. While certain logging operations are certainly illegal, the majority of hardwood decking and flooring distributed in North America is sourced from sustainable timber practices. The goal of this post is to dispel some of the more common myths about rainforest deforestation, sustainable timber harvesting practices, and the real threats to the environment.

MYTH #1: THE TIMBER INDUSTRY IS THE CULPRIT

This is the biggest misconception about deforestation in the Amazon. Countless government and conservation groups agree: both legal and illegal logging operations combined account for less than 3% of deforestation in the Amazon, with legal, selective harvesting coming in closer to 1% . The other 97% of deforestation comes from cattle ranching, commercial agriculture, and infrastructure improvements. Many sustainable timber harvesting companies plant Teak or Mahogany plantations in areas that have been irresponsibly or illegally clear-cut (by others) in the past. MYTH #2: CLEAR-CUTTING IS DONE BY THE TIMBER INDUSTRY

While clear-cutting is certainly the cause of rainforest deforestation, the vast majority of clear-cutting is done by cattle ranchers and agriculture developers. Timber being sold from clear-cutting operations is not part of the sustainable timber industry and is often obtained through illegal logging practices known as slash-and-burn agriculture. Aerial view of deforestation. Rainforest being removed to make way for palm oil and rubber plantations. An example of ‘slash and burn’ agriculture.

MYTH #3: SELECTIVE HARVESTING AND CLEAR CUTTING ARE THE SAME THING

There are over 11,000 different tree species in the entire Amazon rainforest. The average harvest area is approximately 3,000 – 4,000 hectares. Within this harvest area, there are typically more than 100 different species of trees. The vast majority of these species are not of interest to the commercial wood products industry – they’re either too young or the nature of the wood makes it unsuitable for commercial uses.

In fact, there are generally only a few trees per hectare (see image below) that are of interest for logwood, meaning a harvest area can retain the vast majority of its trees while providing a renewable product to the timber industry.

Clear cutting, on the other hand, occurs when cattle ranchers or agricultural developers need huge areas of forest for pastureland. The understory shrubbery is cleared and burned and the forest trees are cut down and sold. The area is then used to plant crops like bananas, palms, maize, or rice, or raise cattle. After a few years, the soil quality drops to an unusable level and the farmers are forced to abandon their land and move even deeper into the forest.

Any company legally logging in the tropical rainforests of South America must submit detailed forest management plans in order to extract timber. Areas that will be logged must be carefully mapped out and divided into sections where each tree will be identified by its species. With the assistance of GPS, detailed maps are created by computers and by hand. Seed trees of each species are left in order to allow natural regeneration to take place. Smaller trees that are underspecified sizes are also left in place so that they may be cut in the next logging cycle, typically in 20 to 30 years. Example of a plan for sustainable forestry management selectively identifying trees to be harvested for commercial use.

This myth has grown from confusion and misunderstanding about the many different types of rainforest logging operations. Yes, there are a number of illegal logging operations going on in the Amazon, but as previously mentioned, the majority of these crimes are being committed by local cattle and agricultural interests.

The sale of illegally sourced timber can hardly even be called logging – it is reckless, unsustainable, and gives no thought to local economies or the environment at large.
Sadly, much of the clear-cutting happening today isn’t even illegal.

Under current Brazilian squatting laws, cattle ranchers and small-scale subsistence farmers can legally clear and use unclaimed public land that they have been occupying for at least one year and a day. After five years the land becomes theirs and they are free to sell it to the highest bidder. These practices, while legal, encourage poor land management and the disregard of environmental concerns.

This issue is complicated and quite counter-intuitive. At first glance, it seems to make sense to encourage local peoples to use their native land to grow food for themselves and the surrounding communities.

However, the slash-and-burn clearing of the rainforest combined with the overuse of the remaining soil does not produce a sustainable agriculture industry. In addition, many of the crops and cattle being raised on cleared rainforest lands are not being distributed locally. Instead, landowners sell their product to overseas buyers, often pocketing the money and giving very little to the workers that produced the crop.

Selective timber harvesting, however, is a proven way to utilize rainforest grounds for commercial use while still preserving the area for future generations. Legal, sustainable logging operations prevent areas from being cleared for agricultural use as well as provide steady jobs to local citizens. Read NovaWoodUSA’s Green Commitment to learn more about Nova’s commitment to the environment.

our commitment to SUSTAINABLY FORESTry

POCO Building Supplies is committed to supplying Lacey Act compliant, Sustainably Harvested Hardwood Decking & Siding products. We do not deviate from our reliable supply chain. We do not buy random containers of lumber in an effort to be the lowest in price. We believe in building responsible partnerships with industry pioneers such as Timber Holdings, NovaUSAWood and TigerDeck. Working closely with these companies, we can offer reliably consistent grade and quality, safe in the knowledge that our hardwoods are manufactured by companies whose goal is to act as stewards of the forests they harvest. 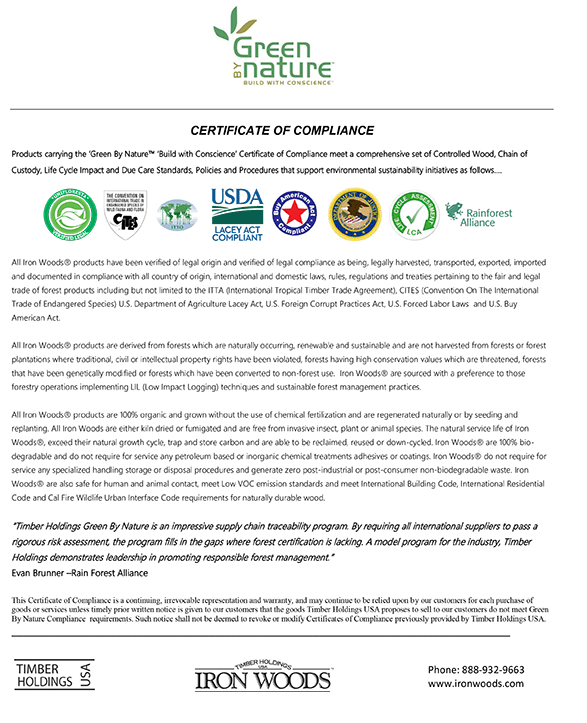 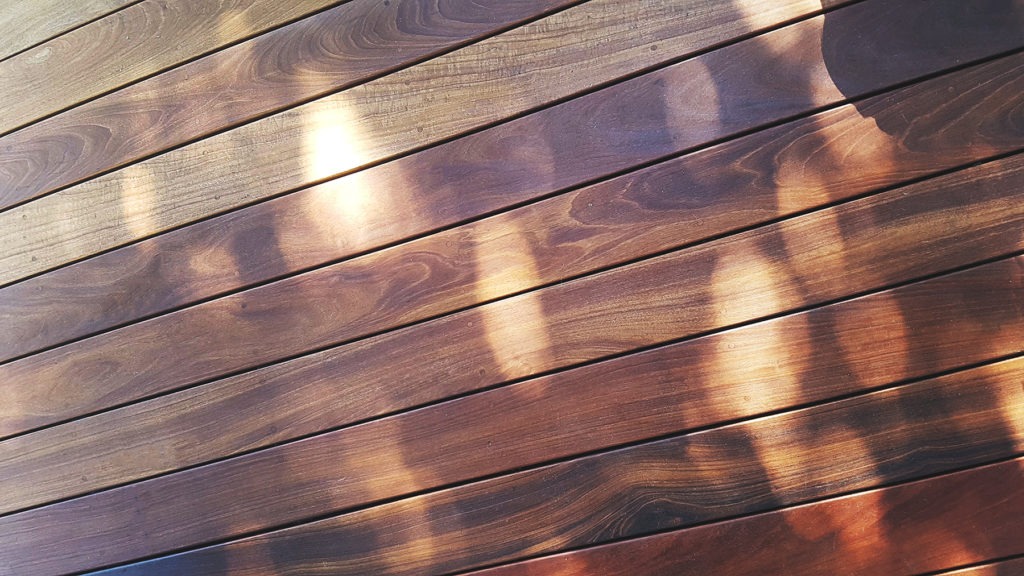